Jose Canseco is already a depressing figure, this card, which Panini America revealed today, somehow tops Jose’s sad life. It’s not the design, which looks great, but the photo and colors which make this card look, well, depressing.

Another thing I’m worried about is if Jose has been left out of the base card checklist, which has all those neat parallels. So far, this is the only Jose I have seen in 2015 Prizm and I’m not sure if there will be parallels of this particular card. Right now, Panini NEEDS MLB logos.

As for the picture, my guess is that it’s from Jose’s Oakland years, probably ’90-’91, though I can’t be certain. I am not sure why Panini made the colors on Jose’s jersey black and grey but it really brings down the card. Green and yellow would have saved this card.

Here’s hoping we see a little more color with this card and its possible parallels or that Jose also had a base card in this set because those base cards look absolutely awesome. A man can dream, can’t he? Click here to see more Prizm.

It’s been a slow week in The Hobby. No card company disasters to report on. No player scandals. No new releases, either. So instead, I’ve decided to write up a little story on some of the most underrated inserts of the 90s. No, these inserts won’t make you rich but design-wise, they are about as unique as they come. They are also extremely outdated but hey, so is much everything from 1996.

With 1996’s Studio release, Pinnacle Brands, who had purchased Donruss/Leaf, put out a magnificent product filled with extremely popular parallels that sell for hundreds of dollars to this day. However, it’s the inserts that caught my eye, specifically, Hit Parade. These cards, which are #’d to 5,000 were seeded 1:48 packs and were designed to resemble a vinyl record of all things.

This again is yet another example of Pinnacle Brands thinking way outside the box and quite frankly, it worked. The cards aren’t eBay Killers but at 5,000 copies a piece they weren’t meant to be. Still, they are about as memorable and interesting as any cards from 1996. Below is a front and back scan for you to memorize. Who knows? You may find one of these in the dollar bin at your next card show.

What Happened to Fresh Ideas?

Below is a beautiful card pulled from a box of 2015 Historic Autographs. It features an immaculate, on-card autograph of Yankees legend, Mickey Mantle. Wait, didn’t Mickey die in 1995? How could he have signed this brand new, 2015 baseball card? I mean, even the slab says it is from this year. What gives? Did Mantle fake his own death to avoid paying his gambling debts?

Okay, here’s the story. The card is really a 1981 Perez Steele postcard, which was signed at some point. All Historical Autographs has done is pasted their fancy, little borders and taken them in to be encapsulated. For around $100 dollars per box, you’re gambling your money away hoping for a Mantle when you’re more likely to find 87 other guys.

It seems like card companies (the lesser-known ones) are making their money by re-packaging old, forgotten products and selling them back to collectors for a premium. Leaf Trading Cards has basically been buying up all their 90s junk wax cards, adding stamps, serial numbering, and autographs and selling it back to collectors instead of focusing their efforts on new, innovative products.

There are also several companies putting together super high-end products with 7-10 cards per box, along with memorabilia for thousands and thousands of dollars per box and doing quite well, if YouTube box breaks are any indication. It seems no one is willing to take a chance at creating something new, instead, we are getting repackaged products at every turn.

Products like these and others are the reason why I support Topps Company and Panini America so much. Say what you will about both companies but at least they are still creating new products every single year. As much as I love the past and collecting for nostalgic reasons, it’s still good to be blown away by something new from the big two.

Topps, We Need This Card Before It’s Too Late

It’s 2015 and Chevy Chase is not a popular man. Young tv/movie fans won’t even know who he is and those old school fans have probably been turned off after the ‘Community’ debacle or Gawker’s scathing article on this now washed-up comedian, writer, and actor.

Still, you can’t erase history and looking back at the 70s and 80s, it’s impossible to deny Chase’s star on the small and big screen. From breaking out on the first season of ‘Saturday Night Live’ to the Vacation franchise, Chevy was a huge star once upon a time.

There are currently just two autographs of Chevy on card board and both are awful 1 of 1 cut signatures. Topps, who has a long history with pop culture would benefit greatly from an SNL autograph set in a product like Topps Archives.

Below is a custom card I found on Google Images, likely created by card genius, PunkRockPaint. This exact card and photograph, with an on-card autograph of Chase would be HUGE. Why it hasn’t happened already is shocking.

Can you imagine a Topps insert line with on-card autographs of Chase, Bill Murray, Chevy Chase, Jimmy Fallon, and other famous SNL alum? It would be huge and would easily break into mainstream news and media, something this hobby desperately needs.

You Be the Judge ! 2014 Supreme Football

From time to time, I receive products for review purposes from Topps Company. I love trading cards but my passion lies in writing about the industry way more than collecting. Today, a package came in the mail and inside was a box of ’14 Topps Supreme Football. I am giving away the complete contents of the box, including the hard case it came in on my dime, all you have to do is give your opinion on the product and a mini-review of the box.

Say you’re a collector walking into a card shop and you pick up this very box of Supreme. Are you happy with the contents? Design? Pulls? A winner will be chosen at random this Friday (03-27). You can leave your entry/review in the comments section.

The cards look great, are super-thick, and the autograph is on-card. You be the judge. Topps is listening. 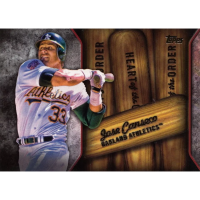 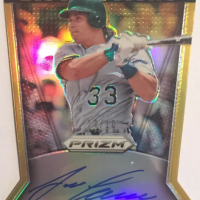