Here we have my favorite Jose Canseco card of 2015 and it comes from none other than Topps’ flagship, series 2.

Before I begin I have to say that this year’s flagship design is easily my least favorite, ever. Not only is it not a favorite but it’s become overused, as it’s been featured in two series, wall posters, Debut, and even the awful Bunt project. Oh, and Chrome eventually.

However, this card is a flat out winner in my book. From the awesome 90’s throwback design that looks like something Fleer would have made, to the awesome photo and even autographed parallel. It’s a perfect Jose Canseco baseball card.

I’ve grown tired of companies including Jose in their autograph subsets while leaving Jose out of their base set and robbing collectors of cool parallels. This is one of the most eye-catching cards I’ve seen this year and a must-have for me to add to my nearly 25-year old Canseco collection. 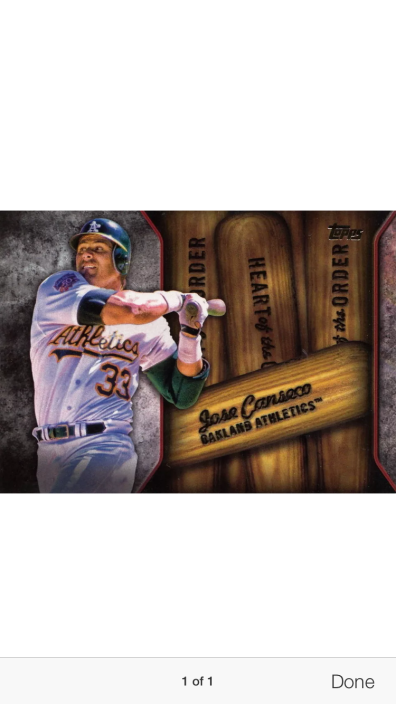 No, I’m not here to bash the hobby or Tanman’s amazing work with custom cards. Simply put, Tanman’s custom Canseco cards have shown me that one man can make better cards than Panini, Topps, and Leaf’s efforts and it’s changed me as a collector. Long gone are the days when I chased every single Jose Canseco card. The parallel madness that took over a decade and a half ago made that impossible for those with mortgages, car payments, kids, what have you. Today I collect mostly what appeals to me, well, I did … until I saw the amazing cards Tanman was producing. New innovations, styles, and creativity from one man was putting the big manufacturers to shame. Now, I only want the best of the best (or about 20% of what’s being released) all because Tanman opened my eyes. The days of inferior custom cards have come and gone and if one man has done this alone, just imagine what possibilities are just around the corner. The days of “Broder” cards and other customs are finished and with guys like Tanman around, card companies should beware and be very scared.

That brings us to 2015 Topps Tier and the only Canseco card that’s surfaced so far. It’s a beautiful, on-card autograph and the brand itself is classy and fun (review and giveaway coming soon) but do I need this card? Not really. I’ve seen way too many Topps horizontal cards this year and this one is not much different than the rest. It’s way better than the 2015 Prizm Jose card but nothing special in my eyes. Also, unless Jose dies suddenly, the value of his autograph will continue to decrease due to the massive amount of autographs being produced. I wouldn’t even mind a few relic and base cards at this point. Anything to switch up the pace for goodness sake.

Not that he needs my help but if you haven’t visited Tanman’s site to see his customs or read his fascinating posts, do yourself a favor and spend the rest of your day there. It’s forever changed my view of our hobby and my 25-year chase for the perfect Jose Canseco collection. Something tells me this man is going to make a huge splash in this hobby in the coming months and years to come. I for one can’t wait to see what he has in store.

I busted a few packs of 2014 Prizm and absolutely loved the Finest wanna-be release and while Topps’ Finest brand will always be my king, Prizm offers a very unique chromium brand from a non-licenses rival company. Below you will see two Canseco cards from ’15 Prizm, one a sticker the other on-card. While I don’t expect any type of logos, it would be nice if Panini America used Oakland A’s colors or at least something similar as it’s obvious to any Canseco fan that these two photos come from Jose’s glory days in Oakland, most likely 1990-91.

I absolutely love the Signatue Distinctions card despite being shaped like a penis and its parallels look amazing. The card below, which features a sticker looks as bland as any recent Canseco I’ve seen in a year and is a definite “pass” for my Canseco collection.

Overall, I’d give Panini’s Canseco effort a C+. It’s a lower score than I expected to dole out simply because one of the cards is so awful that it brings down the overall grade. It would have been amazing to see Jose in Diamond Kings but I guess it was not meant to be. Don’t worry, Topps’ Tier One Canseco didn’t fare much better but that’s for tomorrow’s review.

Anyway, this card was won on eBay three weeks ago but wasn’t paid off until early last week and finally arrived today. As far as Topps cards go, it’s one of my least favorite as the design lacks a lot of pizazz and the thickness of the card, serial numbering, and on-card auto just doesn’t do much for me. However, for less than $15, it’s hard to pass up.

Last week my income tax check was deposited into my bank account. It was bigger than any I’ve ever received. I was driving around in a absolutely trashed 2001 Camaro for two years and with all that cash in my hand I had an option of picking up the iconic Jose Canseco Donruss Crusade (and many more goodies) or treat myself to something much more important, a new car.

In the end, I chose to put my collection on hold and got myself a brand new Chevy Camaro SS. Jose Canseco would be proud. So for now, this card joins my collection and is officially my 1,112th different card and unless I pull any base cards in upcoming Topps products, it may very well be the last one of the year. As much as I love collecting … I think I’d be okay with that. At least I’ll always have Wax Heaven. 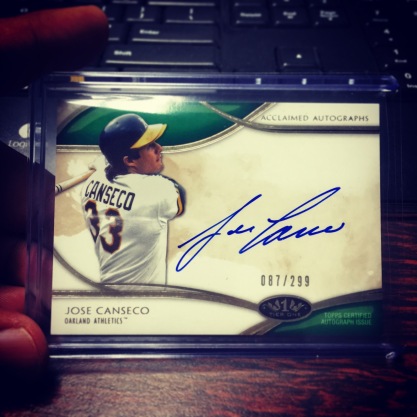 And THIS is Why I Love Topps!

No disrespect to the rest of the card manufacturers but nothing beats licensed, Topps cards. Below is a card pulled from the great @BrentandBecca Twitter account. It’s just one of three Canseco cards that have surfaced from 2015 Museum and all three cards feature different photos. In this day and age, that is impressive!

These three cards, which I’ve only posted 1 due to the WordPress app on my phone being difficult, are the best Canseco cards of 2015 and the one card below is hands down one of the prettiest Jose Canseco cards I’ve ever seen. What’s great is that it’s low on gimmicks, simply relying on a great design, autograph, and cool photo. My only beef is that it’s the same photo from ’14 Allen & Ginter and Archives. The other two cards use completely unseen photos, however.

Some collectors complained about 200+ Jose Canseco cards released in 2014 but after a decade-long absence due to scandals, these cards are a welcome to this long time collector. Keep up the great work, Topps! 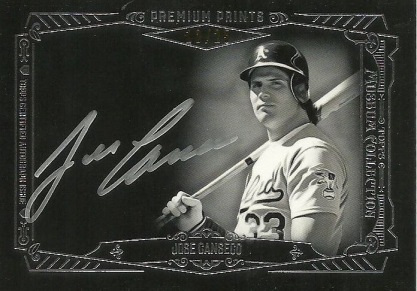